1-888-729-2089
Hours: 10am-6pm EST
Veteran Women of Influence
http://veteranwomenofinfluence.org/
In 2014, Veteran Women of Influence was formed with the intentions of converting a 5-bedroom home into a transitional home for military women who seek to continue their education and/or become an entrepreneur or build their career in the Arts!
Veteran Women of Influence seeks volunteers to help reach its goals of getting the home ready for it to be lived in for veteran women. It wants to have programs for the women to follow in order to give them the success they need to get through the program.
Through the means of 1-on-1 counseling, financial goal planning, mentoring & career coaching services and pre-approval for home loans, Veteran Women of Influence gives women who've served our country the opportunity to live out their lifelong dreams and use their military benefits wisely!
W.E. R.I.S.E Veterans (North Carolina)
http://www.weriseveterans.org/
W.E. R.I.S.E. Veterans is a nonprofit organization designed to assist women veterans throughout the state of North Carolina. We are currently collaborating with other nonprofits in this state to become one network to assist you the women veteran. We are a growing community. New incentives and programs are being created to serve your unique needs.
WINC for all Women Veterans
https://wincforall.com/
WINC is a nonprofit organization dedicated to providing women who were served in the Armed Forces, including those injured either physically, mentally, emotionally, or even spiritually, with the tools they need to enter the world again as a woman, not a service member; while also increasing national awareness about the need to successfully integrate the female warrior veteran back into society.
We offer retreats, meet-ups, etc., and also raise awareness of the issues that affect female veterans in the VA system. We do this by offering symposiums and collaborating with other organizations to help raise awareness of the issues that women veterans face both in and out of the military.
Women Veterans Alliance
http://www.womenveteransalliance.org/
We are the premier national network focused on directly impacting the quality of life of women veterans. We do this successfully through transforming the way the community networks to bring people and programs directly together through a reliable and resourceful platform.
Our Vision -- To CONNECT over 2 million Women Veterans (and our supporters) globally for the PURPOSE of sharing our gifts, talents, resources and experience. We are committed to creating a community that Equips, Empowers & Encourages women that have served our country with knowledge, resources, mentorship, and career opportunities to discover & fulfill their greatest potential.
Our Mission -- Create a community both online and off-line including local women veteran networking groups, community events and national conferences world-wide which provide opportunities to connect and grow.
Women Veterans Interactive
http://www.womenveteransinteractive.org/
Meeting women veterans at their point of need and supporting them through advocacy, empowerment, interaction, outreach and unification (AEIOU).
Women Veteran Social Justice
http://www.wvsjnetwork.org/
https://www.facebook.com/4wvsj/
Women Veteran Social Justice is a support organization with the vision to identify, connect, educate and empower veteran women about programs, benefits, social and professional networking opportunities. Initially started in 2006 as a local support group for employment networking it was expanded in 2008 to social networking and online media giving a broader range and a deeper impact because of collaboration relationships with multiple veteran groups.
Women Veterans Rock
www.womenvetsrock.org
We are a coalition of Women Veteran Organizations and Women Advocacy Organizations supporting women veterans and military families in the areas of: housing; employment; education; financial stability; health and wellness.
Female veterans service organizations
Air Force Women Officers Associated
www.afwoa.org
AFWOA's purpose is to foster comradeship through reunions, maintain ties between active and retired women officers, preserve the history and promote recognition of the role of military women, and lend support to women engaged in education and training programs.
American Women Veterans Foundation
www.americanwomenveterans.org
American Women Veterans is the nation’s preeminent, non-partisan, 501(c)3 non-profit organization that serves, honors and empowers women veterans and their families from all eras and branches of service.
Serve. Honor. Empower.
Army Women's Foundation
www.awfdn.org
The U.S. Army Women’s Foundation is the premier center for educational excellence, the national network for today’s Army women and a dynamic advocate for telling the history of Army women.
Department of Veterans Affairs - Center for Women Veterans
http://www.va.gov/WOMENVET/
The Center for Women Veterans specifically addresses the health care needs of eligible women veterans, providing appropriate, timely and compassionate health care at the facility level.
Military Women Across the Nation
http://www.milwomen.org/
The purpose and objective of this organization is to encourage patriotism, loyalty, and devotion to God, country and family; for each member to help one another and her community, state, and nation; for each member to be of actual assistance; and to keep up each other's morale.
Formerly known as WAVES National, we have revitalized our organization in keeping with the changing military environment.
We now include ALL WOMEN VETERANS who have served or are serving HONORABLY in ALL MILITARY branches.
This also includes a change to both the name and the logo; thus, the former WAVES National will be known as Military Women Across the Nation (MILWOMEN, or MWAN).
Women Marines Association
www.womenmarines.org
The WMA is comprised of women who have served or are serving honorably in the United States Marine Corps regular or reserve components.
Women's Army Corps Veteran's Association
www.armywomen.org
WOSL is a national organization of women who have served overseas in or with the Armed Forces.
Women's Overseas Service League
www.wosl.org
WOSL is a national organization of women who have served overseas in or with the Armed Forces.
Books about and for female veterans
Disclosure: Benita Koeman of Operation We Are Here is a participant in the Amazon Services LLC Associates Program, an affiliate advertising program designed to provide a means for sites to earn advertising fees by advertising and linking to Amazon.com. When you purchase a product that is linked to Amazon, I earn a small commission which in turn helps me to continue with my mission of providing resources to the military community and military supporters. Learn more... 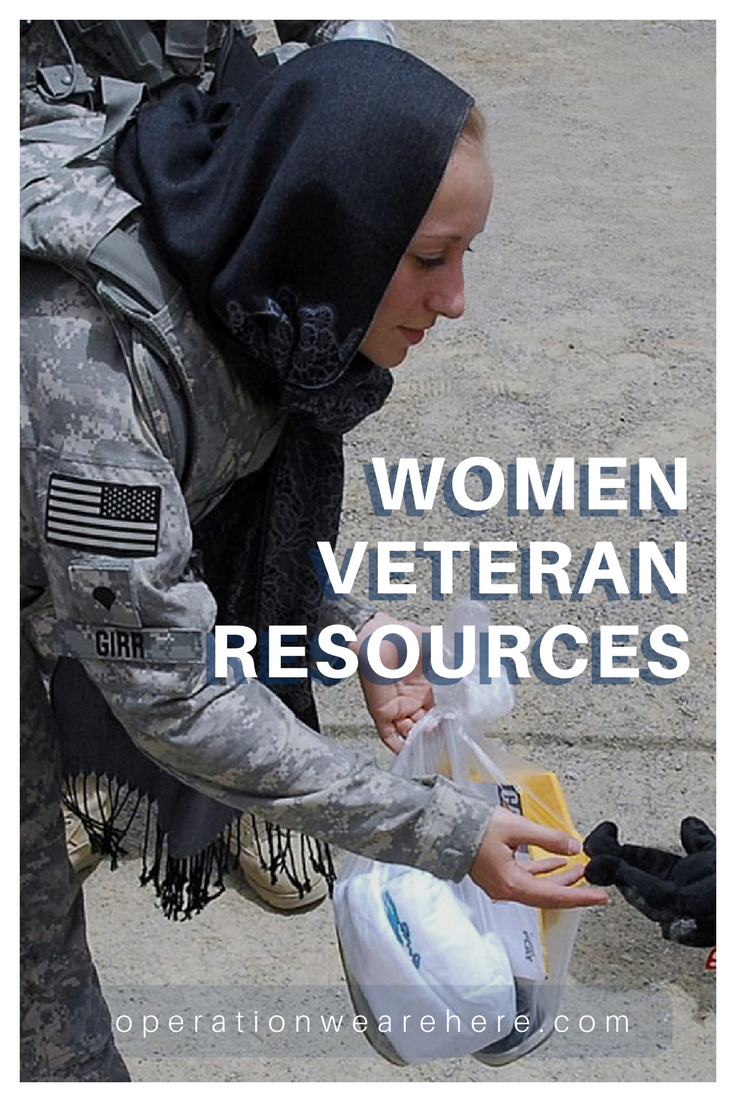