FOR MORE INFORMATION:
_________________________________________________________________________
What wounded warrior families wish you understood...
Cheryl Gansner, completed her degree in Social Work while her husband was on his third tour overseas. Bryan and Cheryl were married four months before his final deployment to Iraq. He was injured only six weeks before returning home. Cheryl now works as the Program Coordinator for Operation Homefront’s Wounded Warrior Wives Program. If you are a female caregiver of a wounded, ill or injured service member or veteran please check out the Wounded Warrior Wives Program at www.operationhomefront.net
________________________________________________________________
Cheryl and Bryan's Story
My husband, Bryan Gansner, was severely injured July 28th, 2006 by an improvised explosive device in Kirkuk, Iraq. We spent a solid year at Walter Reed Army Medical Center rehabilitating his wounds. Then we spent another eight months after that driving back and forth to Walter Reed to complete his medical boards. It was quite the roller coaster going through surgeries and unending doctor’s appointments to get him back in somewhat working condition.
While living at Walter Reed we had many kind people reach out to us.
All of these things truly helped us survive the rehabilitation process. Being removed from our home and friends and being transplanted in DC was very challenging. We knew no one; I had no one to help me take care of Bryan, and all we had were our clothes that were shipped to us. It was nice for others to open up their home to us and feed us a nice meal.
While people have been very helpful there have been handfuls that were hurtful.
What I wish people would understand that if the war is winding down the war at home is not.
We would appreciate prayers for continued recovery. While we are in a much better place than we were even two years ago we could still have another surgery or set back at any time. We also want the ability to put his injury in the back of our minds instead of the forefront. We are ready to move on and help others.
Photo courtesy of Cheryl Gansner 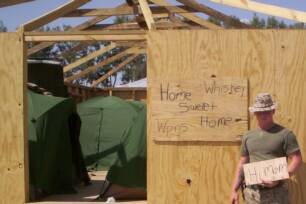 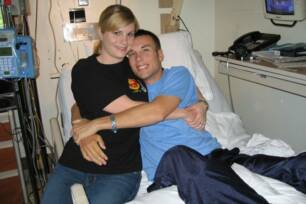