Resources to teach military kids about Afghanistan and Iraq
This page of resources offers tools to help military children learn more about the country where their loved one is serving or has served.
Return to the Military Children & Teen Resource Directory - LINK
Return to Books for the Military Community & Supporters - LINK
Scroll down for more information about:
​Afghanistan
Iraq
Books about Afghanistan and Iraq
Afghanistan
Afghan Children's Songbook Project - Revitalizing the children's music of Afghanistan
www.afghansongbook.org
The Afghan Children’s Songbook Project strives to revitalize the children’s music of Afghanistan which was almost completely eradicated by the war and oppression that has afflicted Afghanistan for over 30 years. Fourteen thousand copies of the songbook, Qu Qu Qu Barg-e-Chinaar: Children’s Songs from Afghanistan have been distributed to pre-schools, elementary schools and orphanages across Afghanistan. The songbook includes a CD and a cassette tape. It has been used both to introduce children to the vibrant music of Afghanistan and also as a basic literacy text. The songbook is printed with bright colorful illustrations and easy-to-read text, making it fun for children to listen to the CD and read along.
Map (Stars and Stripes)
http://www.stripesstore.com/specialpublications.aspx
Stars and Stripes sells an Afghanistan map and a cultural Afghanistan map.
Operation World - More about Afghanistan and how to pray
https://operationworld.org/locations/afghanistan/
The primary purpose of Operation World is PRAYER.
Iraq
Map - Iraq (Stars and Stripes)
http://www.stripesstore.com/specialpublications.aspx
Stars and Stripes sells an Iraq map.
Operation World - More about Iraq and how to pray for this country
https://operationworld.org/locations/iraq/
The primary purpose of Operation World is PRAYER.
Books about Afghanistan and Iraq
Benita Koeman of Operation We Are Here is a participant in the Amazon Services LLC Associates Program, an affiliate advertising program designed to provide a means for sites to earn advertising fees by advertising and linking to Amazon.com. When you purchase a product that is linked to Amazon, I earn a small commission which in turn helps me to continue with my mission of providing resources to the military community and military supporters. Learn more... 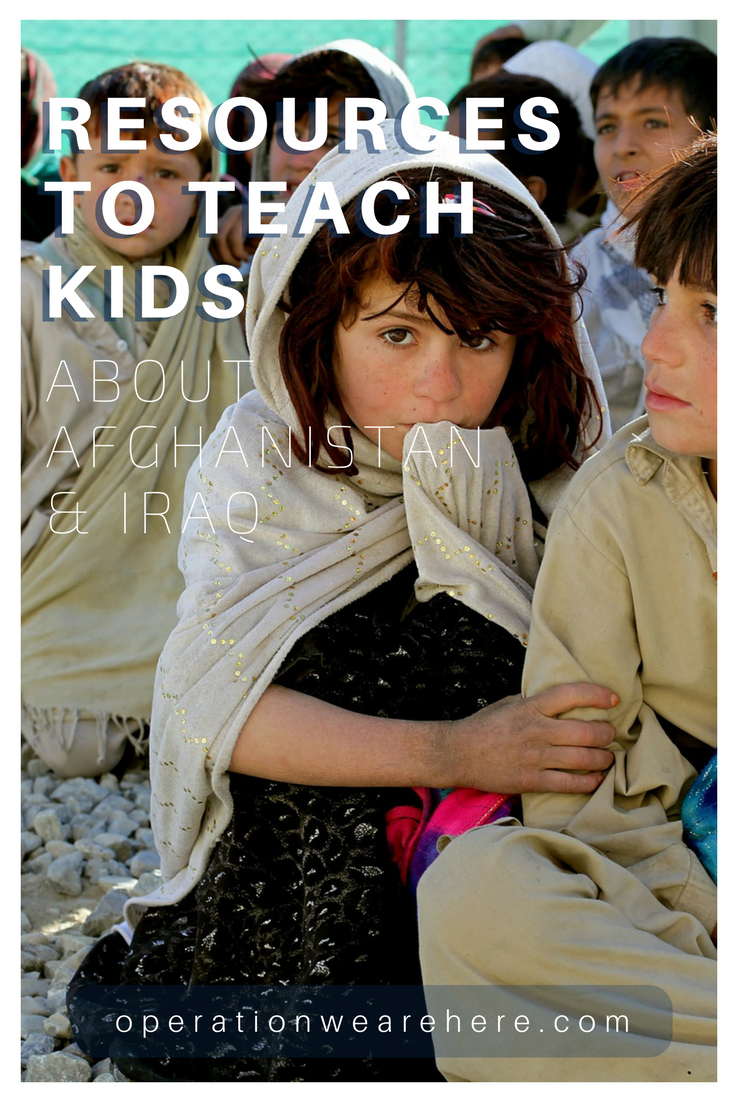 Afghanistan
Listen to the Wind: The story of Dr. Greg & Three Cups of Tea
Author:  Greg Mortenson,  Copyright @ 2009
Ages 4-8
Greg Mortenson stumbled, lost and delirious, into a remote Himalayan village after a failed climb up K2. The villagers saved his life, and he vowed to return and build them a school. The remarkable story of his promise kept is now perfect for reading aloud. Told in the voice of Korpheas children, this story illuminates the humanity and culture of a relevant and distant part of the world in gorgeous collage, while sharing a riveting example of how one person can change thousands of lives.
Three Cups of Tea: One Man's Mission to Promote Peace . . . One School at a Time
The Young Reader's Edition
Authors: Greg Mortenson, David Oliver Relin, Adapter: Sarah Thomson
Copyright @ 2009
Iraq
A few years ago I stumbled across A Child's Geography: Explore the Holy Land, Christian home school material which teaches children the geography of the Holy Land. The book has a separate unit which focuses on Iraq, and as a military spouse whose husband has served there, I found this material exceptionally valuable as a resource to teach our military kids. The additional books listed below are "additional reading" resources listed in A Child's Geography.
A Child's Geography: Explore the Holy Land
Authors: Ann Voskamp, Tonia Peckovery,  Copyright @ 2011
Grades 1-6
If we found the source of the Tigris and Euphrates Rivers, might we find the Garden of Eden? Why is that wall in Jerusalem called the Wailing Wall?  What unbelievable wonders might we find in the desert sands of Egypt? What do Babylon, Nineveh and Ur all have in common? What country in the world is the holy land of millions but you won't find a church anywhere? Can you follow the trail  where Moses once walked to find the Lost City of Stone?
Come, discover the answers to those wonderings and more... explore the modern Middle East, its vast deserts and hidden palaces of Saudi Arabia, its fantastic marsh island homes of the Ma'dan peoples of Iraq, and its resourceful Bedouin tribes who scatter across the the sands of the Middle East.
Alia's Mission: Saving the Books of Iraq
Author: Mark Alan Stamaty,  Copyright @ 2010
Ages 4-8
The inspiring story of an Iraqi librarian's courageous fight to save books from the Basra Central Library before it was destroyed in the war.
It is 2003 and Alia Muhammad Baker, the chief librarian of the Central Library in Basra, Iraq, has grown worried given the increased likelihood of war in her country. Determined to preserve the irreplacable records of the culture and history of the land on which she lives from the destruction of the war, Alia undertakes a courageous and extremely dangerous task of spiriting away 30,000 books from the library to a safe place.
Told in dramatic graphic-novel panels by acclaimed cartoonist Mark Alan Stamaty, Alia's Mission celebrates the importance of books and the freedom to read, while examining the impact of war on a country and its people.
Kiss the Dust
Author: Elizabeth Laird,  Copyright @ 1994
Young adult
Her father's involvement with the Kurdish resistance movement in Iraq forces thirteen-year-old Tara to flee with her family over the border into Iran, where they face an unknown future.
The Librarian of Basra: A True Story from Iraq
Author: Jeanette Winter,  Copyright @ 2005
Ages 4-8
Alia Muhammad Baker is the librarian of Basra. For fourteen years, her office has been a meeting place for those who love books--until now. Now war has come, and Alia fears the library will be destroyed. She asks government officials for help, but they refuse. So Alia takes matters into her own hands, working secretly with friends to move the thirty-thousand new and ancient books from the library and hide them in their homes. There, the books are stacked in windows and cupboards and even in an old refrigerator. But they are safe until the war moves on--safe with the librarian of Basra.
This moving true story about a real librarian's brave struggle to save her war-stricken community's priceless collection of books is a powerful reminder that the love of literature and the passion for knowledge know no boundaries.
Resources for supporters of military and veteran families
Home front families
Military personnel
Parents
PTSD, wounded warriors
Loved ones of the fallen
Military and veteran family resources