Homefront Resources
Send us your stories!
What we're looking for...
A Kid's Journey of Grief, TAPS Edition
Coloring and activity book for grieving military kids

Author: Kimberly Rose Carolan, Copyright @ 2009
Walking through the Valley of the Shadow of Death is a book about one of the most uncomfortable subjects people will face--death. Written from a Christian perspective, it relates to the anatomy of grief, bereavement, and what people around those who have tasted the death of a loved one may be looking for from their friends. Delving into what the Bible says about grief and what friends and survivors can do to effectively minister to those grieving, the books practical guidelines will help both grievers and those trying to help their bereaved friends and family overcome their loss.
We Regret to Inform You
A survival guide for Gold Star Parents and those who support them
Author: Joanne Steen, Copyright @ 2019
A compassionate guide to help Gold Star parents cope with the grief and loss of their military son or daughter.
Author Joanne Steen tackles the subject that terrifies parents of military personnel―the death of their son or daughter on active duty. In short, easy-to-read chapters Gold Star parents find thoughtful explanations and trustworthy advice for coping with military grief. Steen weaves together realistic examples with voices of other Gold Star parents, connecting the readers to the wisdom of those parents who have walked in their shoes.
Chapters for relatives, friends, and professional service providers of Gold Star parents are also included, supplying them with what they need to know about military loss; what to expect in the parents; and best practices on what to say and ways to help support them. Gold Star parents will find a path to survive their life-changing loss and develop the resilience to move forward.
Joanne Steen has more than twenty years’ experience in the grief and loss field, with a specialty in military loss. She is a board-certified counselor, instructor, Gold Star widow, and the founder of Grief Solutions, a training company on grief, loss and resilience. Steen is also the coauthor of Military Widow: A Survival Guide (Naval Institute Press, 2006)
Where the Water Meets the Sand
A memoir
Author: Tyra Manning, Copyright @ 2016
Author Tyra Manning learned that her husband had been killed in the Vietnam War from her psychiatrist at the Menninger Clinic, where she had been hospitalized for clinical depression. After years of battling addiction and depression, and coping with the tragic loss of her father at a very early age, Tyra's worst fear had come true. Larry had been shot down over the Laotian jungle while flying a top-secret mission, just two weeks before their daughter s second birthday.
In this beautifully written, poignant memoir, Tyra Manning recounts how she was able to persevere in the face of devastating loss. With courage, love, and determination, she overcame her grief and fulfilled promises she made to Larry before he left for Vietnam. She ultimately earned a doctorate of education from the University of Kansas and became one of the nation's top school superintendents.
When Tyra received a call from the air force in 2006, she was able to keep one last promise to Larry. His remains had finally been excavated after thirty-five years, and she was able to honor his wish to be buried at Arlington National Cemetery.
Where the Water Meets the Sand explores themes of loss, depression, addiction, courage, and love and offers hope to individuals and families who have also dealt with the loss of someone close to them.
World Changer: A Mother's Story
The unbreakable spirit of U.S. Navy SEAL Aaron Carson Vaughn
Author: Karen Vaughn, Copyright @ 2018
On August 6, 2011, 30 American soldiers aboard Extortion 17 perished in the single greatest loss of Navy SEAL lives. Among them - Aaron Carson Vaughn, a small-town boy who grew up in the hills of Tennessee and lived a life larger than most. Told through the eyes of Karen, Aaron's mother, this tender story of faith, family, and love grips the heart and shows how one family raised an American warrior filled with courage, tenacity, and patriotism. The Vaughn's story is not one about war or about a grieving family, but rather one of triumph and God's sustaining grace. Woven throughout Karen's story is practical advice for today's parents. Also included at the end is a study guide for those who desire to go deeper and learn how to raise children who live life so well that they leave a legacy.
Yours, Very Sincerely And Respectfully
The true story of the Gold Star Ride Foundation's 2018 journey across, around and through America, honoring Gold Star families
Authors: Anthony Price and Keith Carey, Copyright @ 2019
In the summer of 2012, one man was introduced to the idea of our nation’s Gold Star Families in a very personal way.
Since that day, that one man has worked tirelessly to find a means and method to do anything to promote the honor of any Gold Star Family in the United States; even if it meant going to another country.
Born the ninth child in a family of thirteen, Anthony Price has never had it easy. And that may have been the ingredient needed to live out this story.
Yours, Very Sincerely and Respectfully is that story. Taking the closing line from Abraham Lincoln’s famous Bixby Letter, the title encapsulates the message in five words better than any other description.
The story laid out in this book tells everything. It tells you how it began. It tells you why Gold Star Families are important. It details the pitfalls of starting a charity, raising money, and the dangers of riding a motorcycle nearly twenty thousand miles to get the mission accomplished.
The story explains how someone with a dream, passion, and maybe an insane amount of stubbornness will win the day. Persistence will bring ideas to light more than any other ingredient.

Back to top
Copyright 2008 - 2022 Benita Koeman, Operation We Are Here.  All rights reserved.
Operation We Are Here is a HUB of RESOURCES for the military community and military supporters.
Military support is not a concept to embrace; military support is sacrificial action. Visit our military support TOOLKIT.
Gold Star family books for adults, teens & children
Return to Loved Ones of the Fallen Resource Directory - LINK
Return to Books for the Military Community & Supporters - LINK
Memorial Day Books - LINK
Scroll down to view books on loss & grief for:
Children & teens
Adults
Books for grieving children & teens
Benita Koeman of Operation We Are Here is a participant in the Amazon Services LLC Associates Program, an affiliate advertising program designed to provide a means for sites to earn advertising fees by advertising and linking to Amazon.com. When you purchase a product that is linked to Amazon, I earn a small commission which in turn helps me to continue with my mission of providing resources to the military community and military supporters. Learn more... 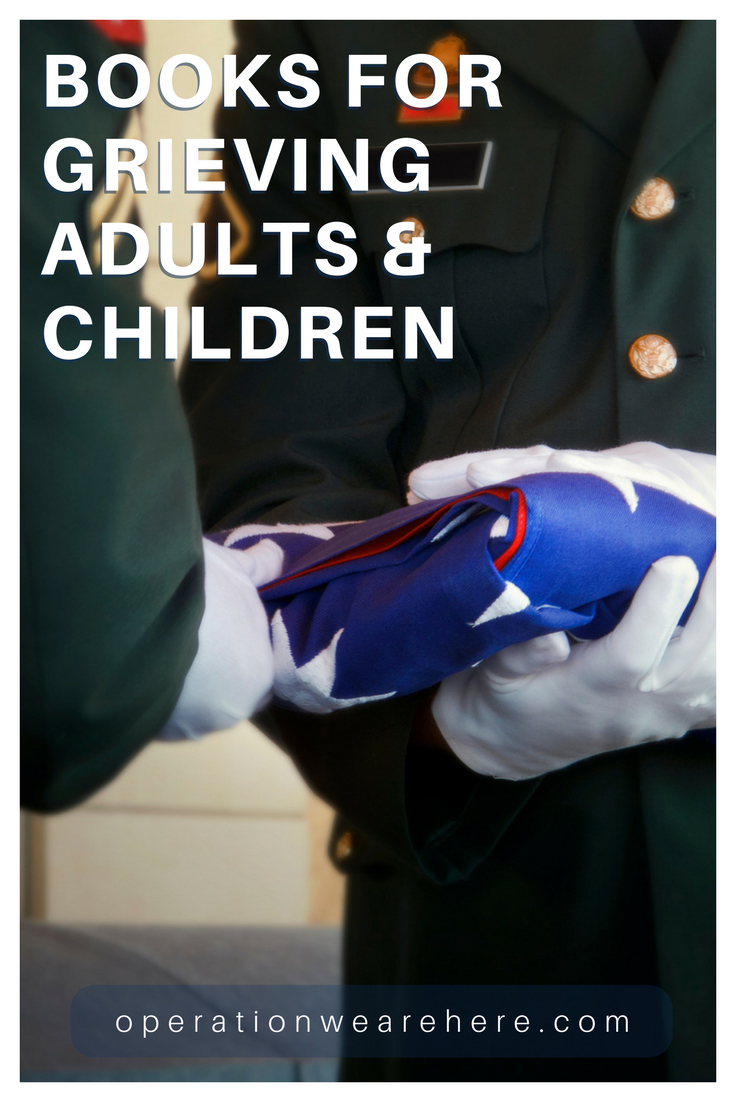