America's White Table
Author: Margot Theis Raven, Copyright @ 2011
Ages 6 and up
The White Table is set in many halls as a symbol for and remembrance to service members fallen, missing, or held captive in the line of duty. Solitary and solemn, it is the table where no one will ever sit.
As a special gift to her Uncle John, Katie and her sisters are asked to help set the white table for dinner. As their mother explains the significance of each item placed on the table Katie comes to understand and appreciate the depth of sacrifice that her uncle, and each member of the Armed Forces and their families, may be called to give.
Klinger: A Story of Honor and Hope
Author: Betsy Beard, Copyright @ 2010
www.taps.org
This beautifully illustrated, full color, hardback children's book tells the story of a young horse dreaming of fame as a racehorse. But his life is disrupted when he must leave his parents and start a new life. Faced with difficulty and disappointment, Klinger’s dream of significance seems unattainable. He then discovers that fame is not necessary, as he finds fulfillment in honoring fallen heroes and bringing comfort to their families.
Based on a real horse that serves in the Caisson Platoon in Arlington National Cemetery, this work of fiction was written for the Tragedy Assistance Program for Survivors in honor of all of America's beloved fallen heroes. Written by Betsy Beard, TAPS magazine editor and surviving mom of SPC Bradley Beard.
Remembrance
A tribute to America's veterans
Author: Robert B. Fletcher, Copyright @ 2005
Ages 4 and up
Remembrance: A Tribute to America's Veterans is the first book to portray veterans and military funeral scenes from all of America's wars in a series of outstandingly precise watercolor paintings and pencil drawings. With compelling scenes from the Revolutionary War to the Afghanistan War, Remembrance: A Tribute to America's Veterans tells the story of the nation's 26.2 million veterans who are alive today and all who came before them. Nearly half of all Americans who served during wartime in our country's history are still alive, and nearly 80 percent of today's veterans served during a war. Remembrance: A Tribute to America's Veterans pays tribute to those warriors by providing a new view of every major war in our nation's history and a view of a veteran's life that has not been addressed before.
Rolling Thunder
Author: Kate Messner, Copyright @ 2017
​Every Memorial Day in Washington, DC, more than a million veterans and their supporters gather for the Rolling Thunder® Ride for Freedom, a demonstration that pays tribute to the men and women of the US armed forces. This lyrical story honors the bravery and sacrifice of those American heroes -- the ones who have returned home, and the ones who haven't.
The Poppy Lady
Moina Belle Michael and her tribute to veterans
Learn more about the story behind this book - VIDEO
Download a professional CCSS Annotated Discussion and Activity Guide
Author: Barbara Walsh, Copyright @ 2012
Ages 7 and up
When American soldiers entered World War I, Moina Belle Michael, a schoolteacher from Georgia, knew she had to act. Some of the soldiers were her students and friends. Almost single-handedly, Moina worked to establish the red poppy as the symbol to honor and remember soldiers. And she devoted the rest of her life to making sure the symbol would last forever. Thanks to her hard work, that symbol remains strong today. Author Barbara Elizabeth Walsh and artist Layne Johnson worked with experts, primary documents, and Moina’s great-nieces to better understand Moina’s determination to honor the war veterans.
A portion of the book’s proceeds will support the National Military Family Association’s Operation Purple®, which benefits children of the U.S. military.
The Wall
Author: Eve Bunting, Copyright @ 1992
Ages 4-8
A boy travels to the Vietnam Veterans Memorial with his father to seek out his grandfather's name. The well-matched text and illustrations are soft but stirring.
________________________________________________
Memorial Day Books for older readers
Faces of Freedom
Profiles of America's Fallen Heroes: Iraq and Afghanistan
Author: Multiple authors, Copyright @ 2007
The stories in Faces of Freedom are true stories...stories of service, sacrifice, pride and love. The stories will remind you that America has been blessed with greatness in every generation and no generation has shown greater valor than our current generation of heroes in Iraq and Afghanistan. Read and be inspired. --Gen. Colin L. Powell 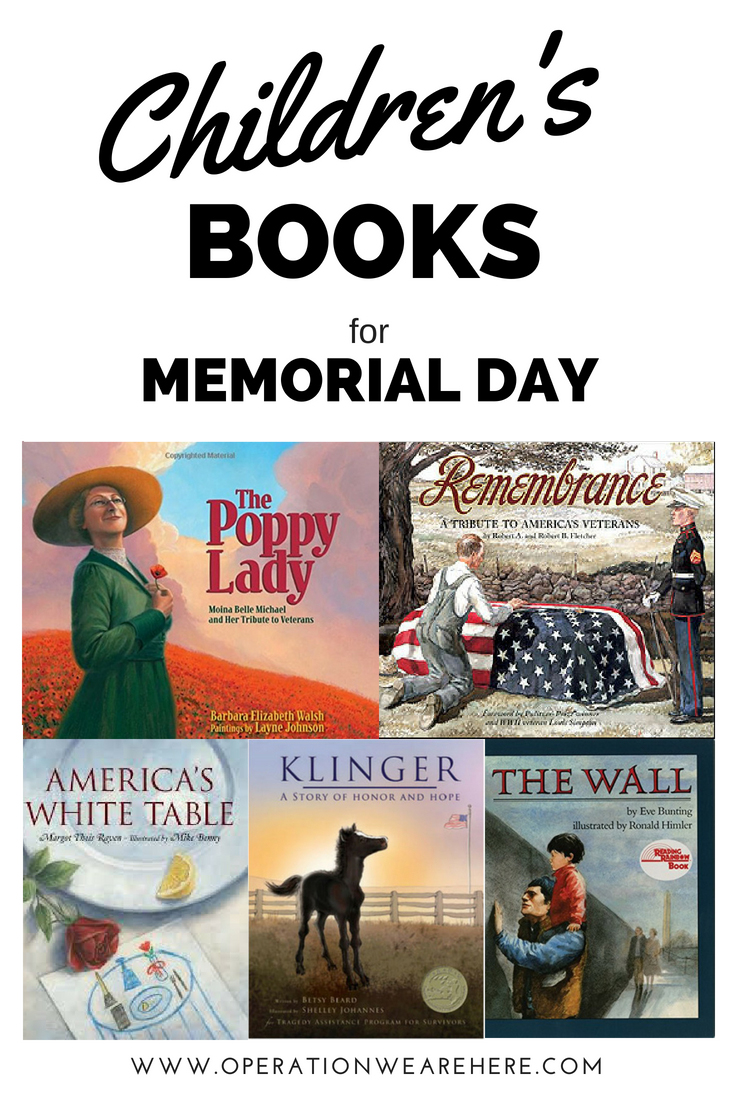