Christmas books about the U.S. military for kids
Return to Military Children & Teen Resource Directory - LINK
Return to Books for the Military Community & Supporters - LINK
Benita Koeman of Operation We Are Here is a participant in the Amazon Services LLC Associates Program, an affiliate advertising program designed to provide a means for sites to earn advertising fees by advertising and linking to Amazon.com. When you purchase a product that is linked to Amazon, I earn a small commission which in turn helps me to continue with my mission of providing resources to the military community and military supporters. Learn more...

Authors: Trish Holland and Christine Ford, Copyright @ 2006
Ages 4-8
One Christmas Eve at a military barracks in the Middle East, some homesick soldiers are paid a visit by Sergeant McClaus, the Santa of Soldiers. This lively and poignant tale is inspired by Clement C. Moore's classic yuletide poem. 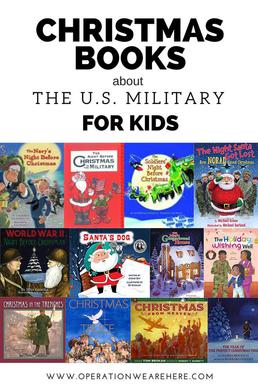 Christmas from Heaven
The True Story of the Berlin Candy Bomber
Author: ​Tom Brokaw, Copyright @ 2013
Ages 5-8
Christmas from Heaven is the story of the humble beginnings of what became a beacon of hope to a war-torn land, the story of Gail Halvorsen, a young pilot in the US Army Air Corps who was assigned as a cargo pilot to the Berlin Airlift, in which US forces flew much-needed supplies into a Soviet-blockaded Berlin.
As he performed his duties, Lt. Halvorsen began to notice the German children gathered by the fences of Tempelhof Air Base. Knowing that they had very little, he one day offered them some chewing gum. From that small act, an idea sprang: He would bomb Berlin with candy. Fashioning small parachutes, he and his crew sent them floating down as they approached the Berlin airport, wiggling the wings of their C-54 as a signal to the children that their anticipated cargo would soon arrive.
Lt. Halvorsen became known by hundreds, if not thousands, of children in Berlin as Uncle Wiggly Wings or The Candy Bomber. Word soon spread, and donations of candy and other supplies poured in from sympathetic Americans. Lt. Halvorsen's small idea became a great symbol of hope not only to German children in a bombed-out city but to all those who yearned for freedom.
Famed broadcast journalist and author Tom Brokaw brings this remarkable true story to life in a stunning live performance with the Mormon Tabernacle Choir, captured on the accompanying DVD. Also included in the book is a template and directions for creating your own Candy Bomber parachutes.
Christmas in the Trenches
Author: John McCutcheon, Copyright @ 2006
Ages 6-9
Set in the trenches during World War I, this haunting story is based on a true event known as the Christmas Truce and is adapted by award-winning songwriter John McCutcheon. Full color. With CD.
Christmas Truce
A True Story of World War 1
Author: Aaron Shepard, Copyright @ 2016
Ages 9-12
One night of peace in a world of war.
"Christmas Day, 1914 . . . My dear sister Janet . . . It is 2:00 in the morning and most of our men are asleep in their dugouts -- yet I could not sleep myself before writing to you of the wonderful events of Christmas Eve. In truth, what happened seems almost like a fairy tale, and if I hadn't been through it myself, I would scarce believe it. Just imagine: While you and the family sang carols before the fire there in London, I did the same with enemy soldiers here on the battlefields of France!"
The Christmas Truce of 1914 is one of the most extraordinary incidents not only of World War I but of all military history. Providing inspiration for songs, books, plays, and movies, it has endured as an archetypal image of peace. Yet much about the historic event remains shrouded in myth and legend.
In this fictional letter -- illustrated in authentic detail by Wendy Edelson -- award-winning author Aaron Shepard draws from firsthand accounts of soldiers at the front to portray the truce in its true nature and spirit.
Shooting at the Stars
Author: John Hendrix, Copyright @ 2014
Ages 8-12
​Discover the incredible true story of the Christmas Truce of 1914 in this award-winning picture book from author and illustrator John Hendrix
Shooting at the Stars is the moving story of a young British soldier on the front lines during World War I who experiences an unforgettable Christmas Eve. In a letter to his mother, he describes how, despite fierce fighting earlier from both sides, Allied and German soldiers ceased firing that evening and came together on the battlefield to celebrate the holiday. They sang carols, exchanged gifts, and even lit Christmas trees. But as the holiday came to a close, they returned to their separate trenches to await orders for the war to begin again.
Award-wining creator John Hendrix wonderfully brings the story of the Christmas Truce of 1914 to life with his signature style, interweaving detailed illustrations and hand-lettered text. His telling of the story celebrates the humanity that can persist during even the darkest periods of our history.
The Year of the Perfect Christmas Tree
An Appalachian Story
Author: Gloria Houston, Copyright @ 1996
Ages 3-8
This unforgettable tale, illustrated by Caldecott Medalist Barbara Cooney, has become a seasonal classic-a touching and joyful story about courage and the power of family.
World War II Night Before Christmas
Author: Mike Guardia, Copyright @ 2018
Ages 8-12
T’was the night before Christmas, when along the frontlines…
Santa makes a surprise visit to the American GIs in Europe - Christmas Eve, 1944.
"Mike Guardia’s beautifully illustrated new children’s book "World War II Night Before Christmas" shares a heartfelt glimpse into the sacrifices Allied troops made during World War II, along with a joyful dose of Christmas spirit. "
- Big Blend Radio and TV Magazine
Be sure to check out these ADDITIONAL resources:
Military children's books about
Books for military teens
Deployment journals
Deployment support for